My Grandma claimed to know nothing about football. “Oh, I’ll leave you men to talk about the football”, she’d say, but she knew alright. She knew exactly what was going on with the Town. I don’t know if she ever visited Portman Road – she was deeply uncomfortable about going into pubs and the bookies, which she saw as places unsuitable for a woman (sent once by my Uncle to collect his winnings, she walked up and down the street, past the door, but couldn’t bring herself to go in). I’m not sure if watching Ipswich fell into that category but, to my knowledge, she never went. Still, she read the Evening Star every day, cover to cover, and knew more about Town than she would ever let on.

She lived in Ipswich for all of her life, unless you count Bramford as being outside, and naturally knew who was who and what was what. So it didn’t take her long to discover that the woman who worked in the wool shop was Eric Gates’ neighbour (or mother-in-law or something – that particular detail escapes me) and that she would be happy to get Eric’s autograph for me. 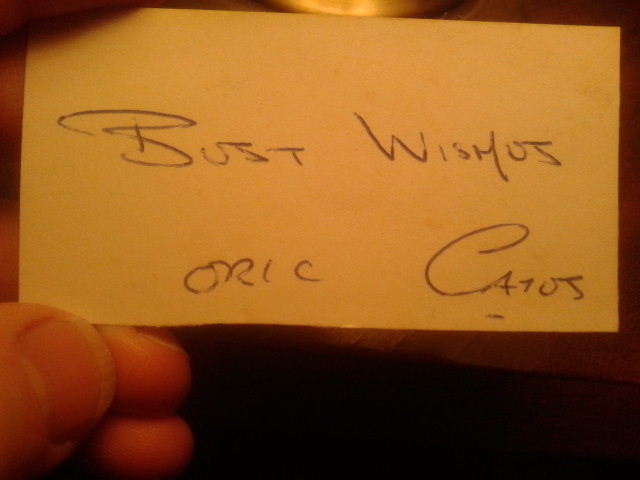 I was thrilled – I was twelve, and Bobby Robson’s team was breaking up. Robson himself had left a few years before, Wark, Mariner, Brazil, Mills, Thijssen and Muhren had all gone, but Eric Gates remained and was, to my mind, single handedly keeping the Town in the First Division.

Burley, Butcher, Cooper and Osman might all disagree that last point, as might Alan Sunderland who was signed for the last few weeks of the season and perhaps acted as the catalyst that galvanised a team that was fast plummeting down the league and into Division Two. None of this was important for a certain 12 year old, and it was the performances and goals of Eric Gates that captured my heart and earned my adoration.

A dreadful run of seven straight defeats was halted, and an impressive home draw with third placed Forest gave some hope, although it still left the Town in the relegation places, four points adrift with just six games to play, including visits to Anfield and Old Trafford. Worse, the game also marked the end of Butcher and Burley’s seasons – both injured and out for the remainder.

What followed was the stuff of legend. Wins over Wolves and Norwich set Ipswich up for the visit to Anfield and the league leaders. Two Eric Gates wonder goals gave Town a half time lead, and cemented him in my personal pantheon. I spent several hours last night looking for the match on YouTube, but with little success. I did find one of the goals here – a ten second clip as one of Match of the Day’s Goals of the Season, but the other remains just a memory, seared into my mind as a thirty yard belter, but more probably something less spectacular. Perhaps it is better to remember it as I remember it, rather than have it diminished by the truth. Liverpool equalised, but Town came back to Suffolk with a point and their noses just in front of Stoke in the battle to stay up.

In the end this was achieved in some style – a win over Sunderland was followed by an astonishing Bank Holiday Monday win at Old Trafford (Alan Sunderland scoring with 4 minutes left) – a result that ensured Town’s survival, whilst also ending United’s title challenge. We were visiting my Grandfather (the one who wasn’t from Ipswich) and he liked an afternoon nap. He was not to be interrupted. So I sat in the car, listening to Radio 2 MW and the live commentary (to be honest, I have no idea who commentated, but we’ll allow this rose tinted memory to be perfect and for it to have been Peter Jones – just as long as it wasn’t Alan moaning Green), not quite believing what I was hearing.

That was a beautiful day. A win over Villa on the last day of the season ensured a comfortable mid-table position and another Gates goal left him as the Town’s top scorer for 1983-84. But more than that, for it also earned him a place as the hero of a boy who, thirty odd years later is still, in his heart, sitting in that car feeling the heat of the sun through the windscreen whilst revelling in the glories of Eric Gates and Ipswich Town.

View all posts by ericwark