Ours were clean shaven times – remember how hard it was to come up with a team made up entirely of bearded players? Gary Birtles was probably more famous for his beard than his football back then and was always first on the teamsheet, with Cyrille Regis for company up front. Danny McGrain, Steve Foster and big Micky Droy at the back. Archie Gemmill in the middle perhaps but George Best had retired, so he wasn’t allowed. But who went in goals? I think Paul Cooper was briefly a beardy, but there really weren’t any other keepers that did. This was no easy task! Moustaches were abundant, but beards a rarity. World Cups brought us exotic whiskered footballers, such as the cigar smoking Marxists Paul Breitner and the utterly wonderful and cooler than cool Socrates, but still not many others that I can remember.

Those days are gone now – fourteen beards are on display in Godmanchester this afternoon. There are half a dozen more unshaven, and a lad probably too young to contribute to this discussion, with nary a hair in his chinny chin chin. Which leaves one clean shaven throwback to the good old days. It is honours even on the pitch, 7 beards apiece, but it is the magnificent greybeard Goddy trainer who has the best of the lot. Slight advantage to Rovers then, who are hosting Kirkley and Pakefield in the Eastern Counties League. East versus West!

It is my first visit to Godmanchester, and the approach is uninspiring. The ground is a world away from the pretty waterside end of town, tacked on as it is to the edge of a half built housing estate, up a dirt track and into a cinder car park – it is a place of corrugated iron and chain link fencing. But the turnstile takes you into a cosy little ground, if a little exposed in places (especially with this gale blowing) with a small but cheerful crowd intent on enjoying themselves. The bar is doing good business – in some respects this feels less like a ground with a decent bar and more like a social club with a football ground attached.

The game itself is feisty from the off – both sides getting stuck in with some eye-watering tackles, not leaving much space for any football to be played. And I laugh when the Goddy keeper yells out, “no unnecessary fouls, lads!”, which suggests both a certain acceptance of necessary fouls and a problematic disciplinary record. “NO FOULS!” he bellows, as the cross comes in. I noticed in the programme that sinbins are now a thing – I haven’t come across this before, but they have apparently been in place all season. It only applies to dissent, oddly, which is seemingly absent here – all that effing and blinding but not a word being said against the ref? Perhaps he has been turning a deaf ear to it.

Actually, the referee seems to be encouraging discourse – many of his decisions appear to be reached after lengthy discussions with the players, including the free kick towards the end of the first half. The game has been opening up and a Goddy break is ended when the Kirkley centre half goes straight through his opponent. There may well be a case of him getting the ball before the man, but the follow through ensured that he got the man too. The complaining goes on for an age, but to no avail, and Munro lashes home. It’s a cracker too. Five small boys, having given up taunting the visitors dug-out, are now behind the goal and go mad.

I wonder if the bloodletting of the previous 45 minutes has tired the players, or maybe they’ve put something in the tea to calm them down, but the second half opens with an outbreak of football – it’s good stuff too! End to end, with decent passing moves from both sides, the visitors narrowly edging things, But on twenty minutes some dodgy defending allows a Goddy cross to reach the back post for Diaper to bundle it over the line. Two nil, and the game is effectively over.

The game now just plays itself out – there is no drop in effort from the players, but it has that end of season dead rubber feel to it. There are chances at both ends – a terrific weaving run from the Kirkley number seven ends with him being bundled over before he can get a shot in, but it is Goddy who are in the ascendancy now. They rattle the crossbar and skim one past the post. Then the third goal, which comes from a penalty – the keeper having taken the legs from the forward bearing down on him.

For the remainder of the game, Kirkley are down to ten men. I didn’t see anybody being sent off – injury, or is the sinbin being employed? I didn’t hear anything (at least, nothing worse than the previous eighty five minutes of invective) but perhaps the ref did. There is only so much abuse you can take. The final piece of excitement belongs to Mike Hyem. For the whole game he has been a constant source of irritation, to opponents and officials alike. Tugs, nudges, niggly tackles, vicious digs – all elbows and knees. A right pain in the arse, he hasn’t stopped talking since kick off, in the centre half’s ear, advising the lino, moaning at the ref. He’s been terrific to watch – the kind of player you love if he’s on your side, hate if he isn’t. The only thing he hasn’t done is score, and in the final seconds he is clean through on goal. He howfs it over the bar – the ball is still rising as the referee blows his whistle and I turn to make my way back to the car in time for Sports Report. 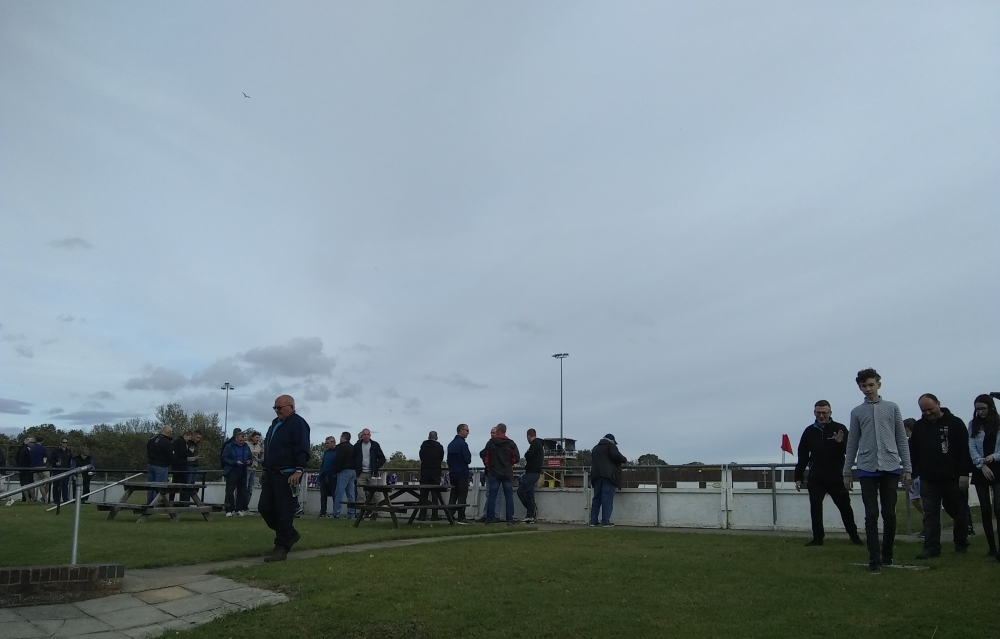 View all posts by ericwark